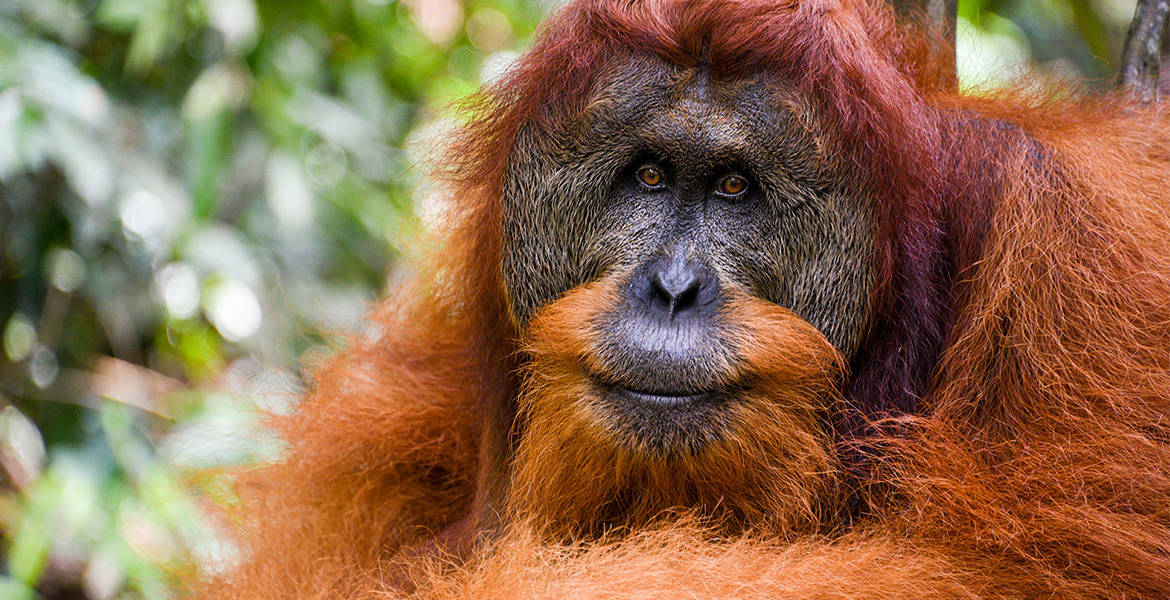 Having reset our Indonesian visa in Kuala Lumpur, we were ready to leave the hustle and bustle and return to the serenity of rural life. We flew into Medan, were swiftly picked up at the airport and driven 4+ hours north-west into the Sumatran rainforest. We were here for a 4-day trip in search of Sumatran Orangutans. To see these beautiful creatures in their natural environment was something we have wanted to do for many years. It seemed fitting, as we were so geographically close, to end our round the world adventure here. 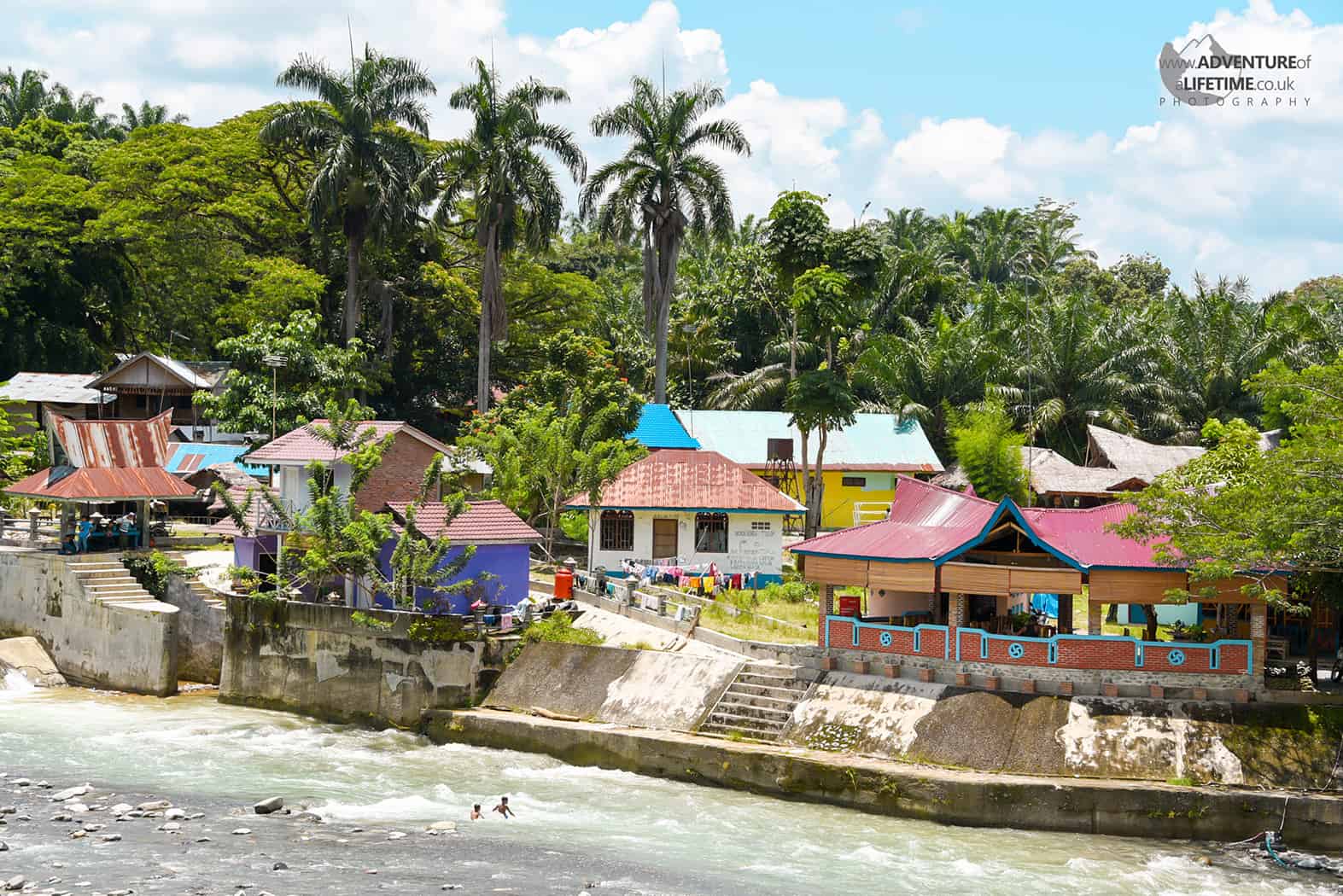 Bukit Lawang is a quaint little village in North Sumatra, it’s one of the last places on earth where you can see semi-wild and wild Orangutans in the rainforest. It’s the gateway to the Gunung Leusar National Park which, with the surrounding national parks make up a UNESCO World Heritage Site (listed 2004). A hugely biodiverse region which is home to orangutans, tigers, rhinos, elephants, leopards and many more incredible animals.  Bukit Lawang was once the largest animal sanctuary and rehabilitation centre for the Sumatran Orangutan. It has now closed due to reaching maximum population density for the area, so a great spot to see them in the wild.

Driving along dirt roads into Bukit Lawang, we were greeted with bright colours and smiling faces. Upon reaching Bukit Lawang we had a rope bridge river crossing to reach the hotel. This would have been fun any other time, but with numb legs from the car and while carrying all our worldly possessions on our backs it was a little disconcerting.

The hotel was an ‘interesting’ affair. It provided us a true rainforest experience as we had to battle monkeys to reach our room, had no AC (30C and 80% humidity) and the shower didn’t have enough flow to do any more than form a trickle down the wall. Instead we had to wash under the toilets ‘bum gun’. Not luxury! But, in truth we really didn’t care, it was fun, the people were lovely and all we needed was a bed and mosquito net.

We took a quick trip to the nearby Bat Caves – I’m not sure that we saw any bats, but we did see our first Orangutan up in the distant treetop. This was very exciting – it meant they were close, so fingers crossed we would see plenty more during the trek. The rest of the day was spent settling in and feasting on delicious fresh jungle food. Need to load up for our trekking tomorrow! 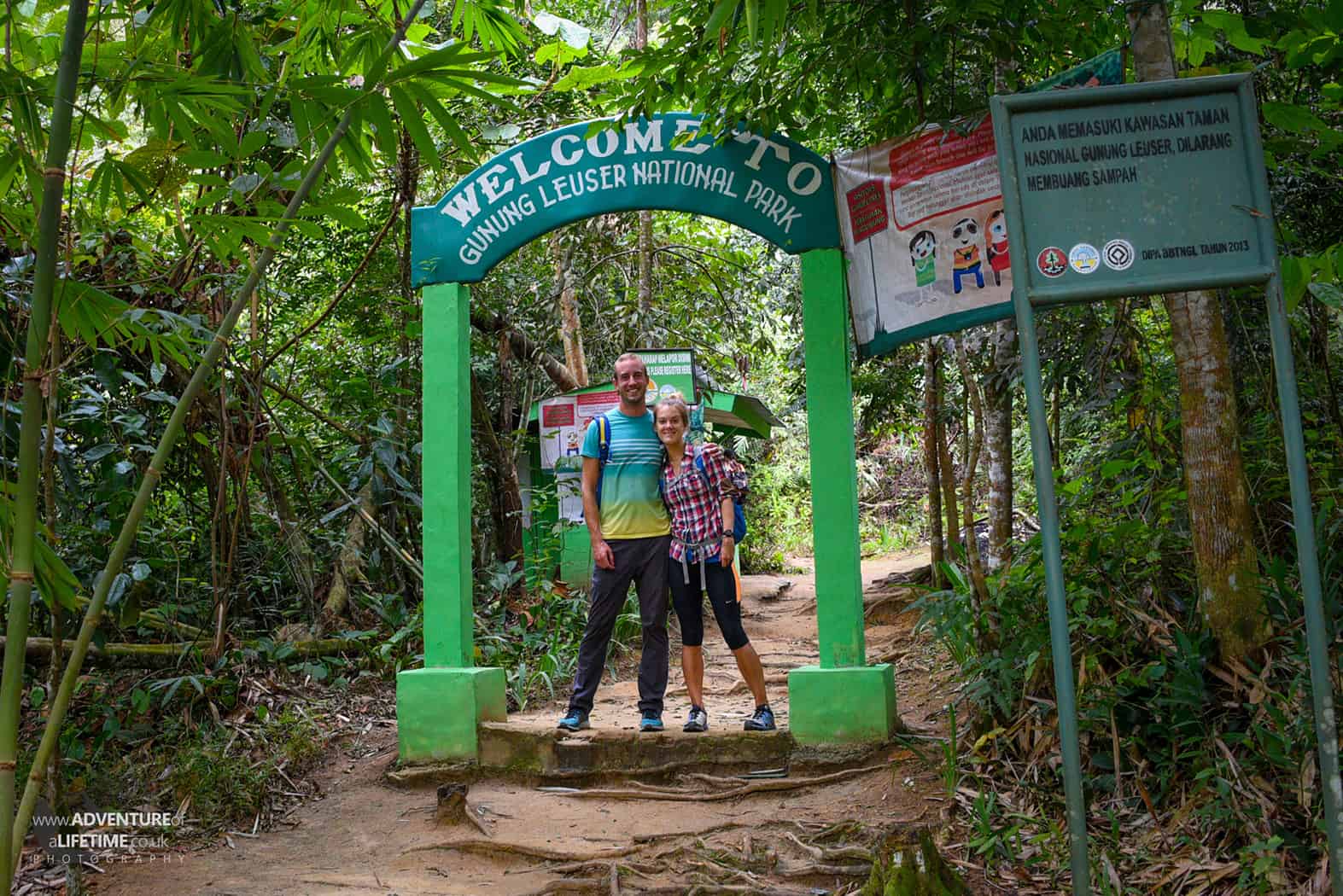 Our guide ‘Yan’ met us bright and early ready to take us deep into the jungle. He was a young smiley and enthusiastic chap eager to teach us the ways of rainforest life. The Sumatran jungle was SO HUMID, poor Michael was pouring with sweat – I’m certain there isn’t a dry photo of him during this trip! 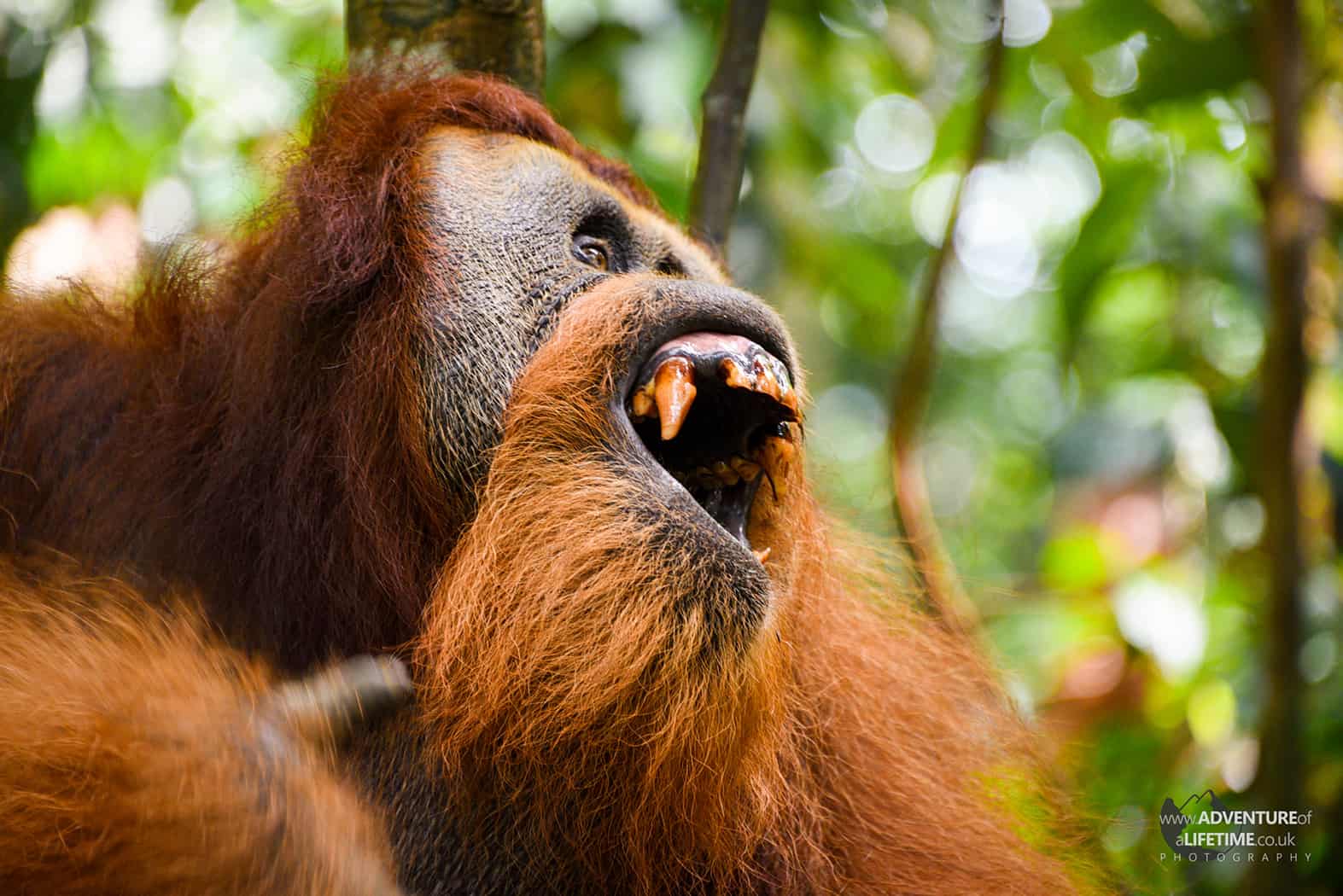 Quite early on we saw some Orangutans chilling out, high up in the trees. We weren’t sure what to expect from this experience so seeing them high up was pretty special – we thought this could be it! We might not see anymore. Oh, how wrong we were! The next Orangutan was just around the corner, he was male, MASSIVE and sitting on the jungle floor! Just hanging out, acting like a celebrity with tourists snapping his photo, all very casual!

Can you imagine being eye level to a male orangutan with no barrier between you!? It’s surreal. The guides were very relaxed – until he moved, then there was urgent shouting as we quickly moved to make way for him and keep a safe distance. The area got busy, so we moved on, but it wasn’t long before we came across the next male. Orangutans move so effortlessly, are agile and incredibly orange in real life! I was honestly expecting to see orangutans up in the trees, spotting them far away. Not a few metres in front of us. 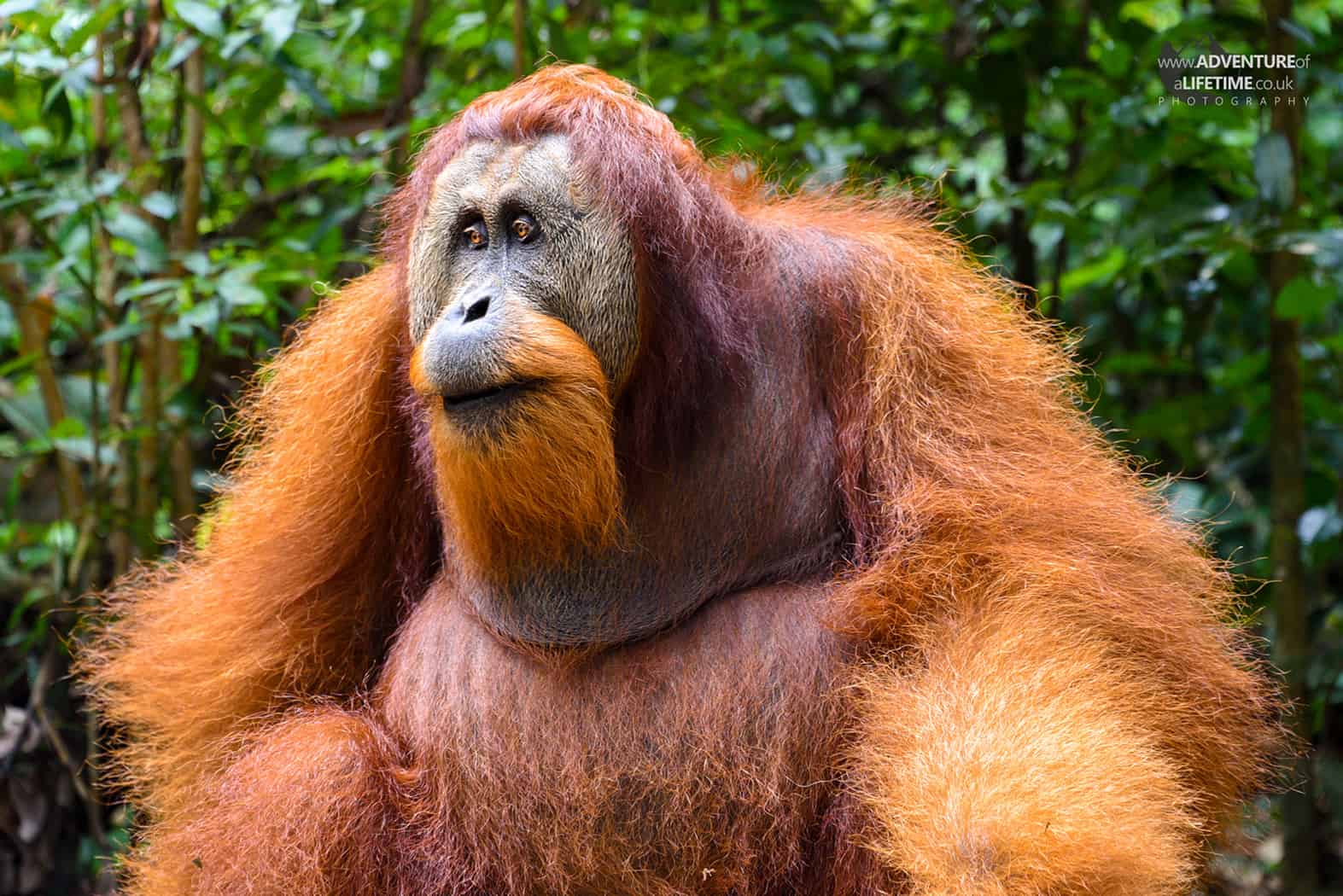 After a delightful jungle lunch, it was time to crack on, off we went in search for more orangutans. We’d heard rumours about a particular orangutan called Jackie. She was a relatively young mum of two and had been rehabilitated from the station before it closed. Which to the guides, meant that she was safe to get close to. Yan wanted to find her and knew just the place to look. 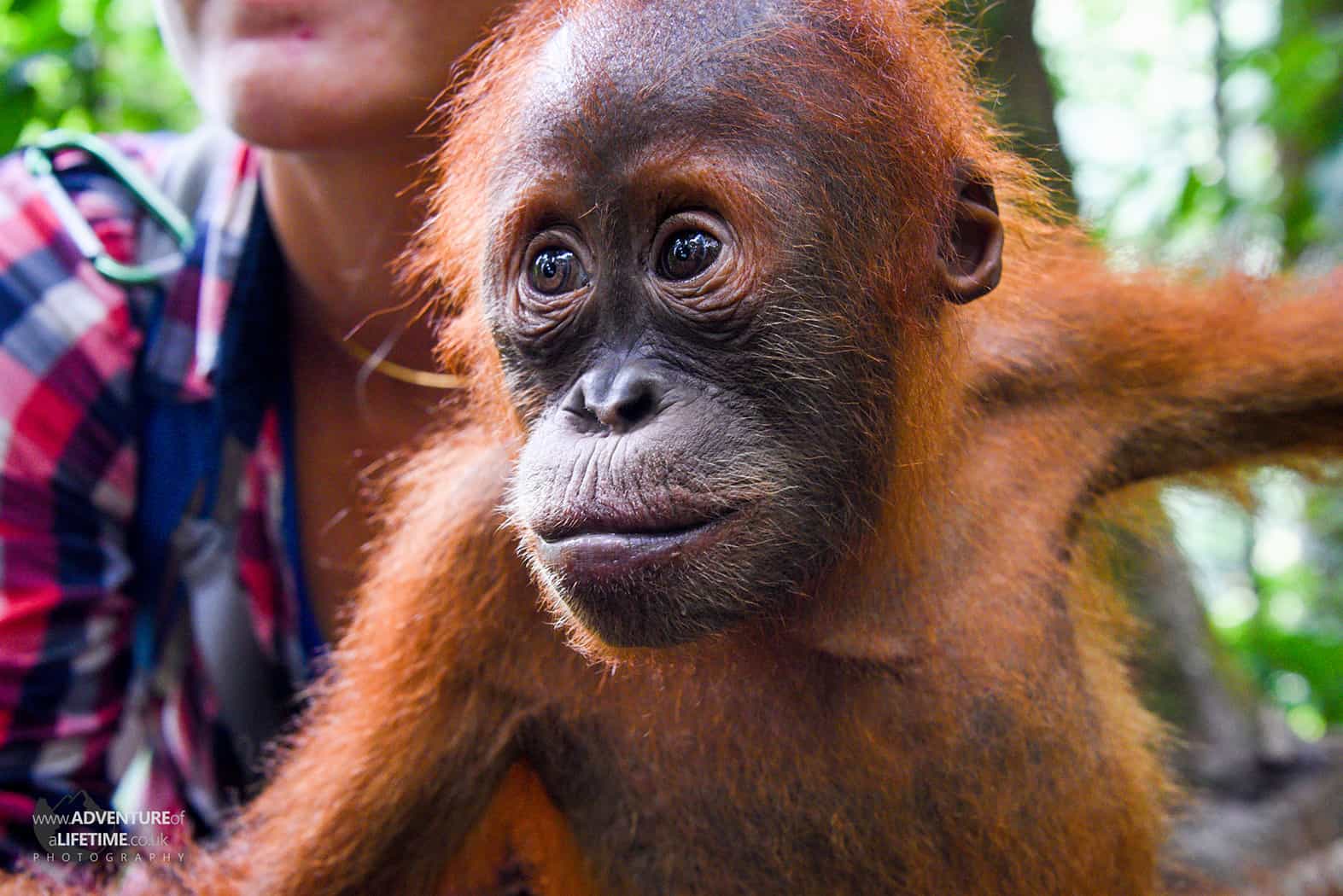 I still feel very conflicted by this, I don’t think Sir David would advocate this next behaviour.

Jackie approached, she was beautiful and her baby absolutely adorable. Her older daughter held back, not quite sure about interacting with humans. Before I knew it, Jackie was holding my arm. Ok I thought, I wasn’t expecting this, but she was gentle enough – I didn’t feel threatened. It was really lovely the way she initially took me for a walk and introduced her baby. Although, again very conflicted about teaching a new generation that human contact is ok, but in the moment, I really didn’t have much choice in the matter.

It was all very nice until the situation changed and I did feel threatened! She damn well knew she had me hostage and was after our food. Naïve Yan just kept feeding her without making the trade-off! Me for the food! Me for the food! I was getting very scared, she started gumming my hand – I had no way of getting away. Orangutans are so fricking strong! We quickly ran out of food, so I was at the mercy of this powerful orangutan. Poor Michael was powerless too (and possibly didn’t clock how tight her grip was on me). Thankfully another guide was close by and came to my rescue. This time trading food for my release!

After the Jackie experience, I didn’t want another close encounter. I felt happy to see orangutans in the distance, I just didn’t want any contact again. That was not for me. The final orangutan we encountered was Mina. She was known to the guides to be aggressive, so we kept a very safe distance while our guide decided to feed her.

Very mixed feeling about all of this. It is great to get up close, but I don’t believe it is the way we should be interacting with wild animals if we want to conserve them. As lovely as the guides all were, unfortunately they believe they are doing us a favour in bringing the orangutans closer – and there was little we could do (as individuals) to stop them. Hopefully in time, they will learn that a more distant approach is the best for the long-term survival of the species.

By the end of the day, we were pooped and the jungle camp by the edge of the Bahorok river was a welcome sight. So was a wash in the river! There was another group staying in the same camp, before dinner they went off with their guide in search of a waterfall they’d heard about. Unfortunately, they didn’t make it very far before disaster struck. A German med student was crossing the turbulent river and lost his footing, hitting his head on the way down. He was knocked unconscious under the water, after a frantic few minutes some guides down river hauled his unconscious body to shore. There’s no A&E for about 5+hours from where we were. The guide hoicked him upside-down to get any water from his lungs and he came to.

Thankfully he was ok and seemed less shaken by his ordeal than the rest of his group. He seemed more embarrassed than anything else and bravado seemed to be getting in the way of sensible thinking. It was still his intent to board an international flight the next day. This can be extremely dangerous if you have water in your lungs, which this guy must have had. We told him it was a bad idea and we hope he listened. 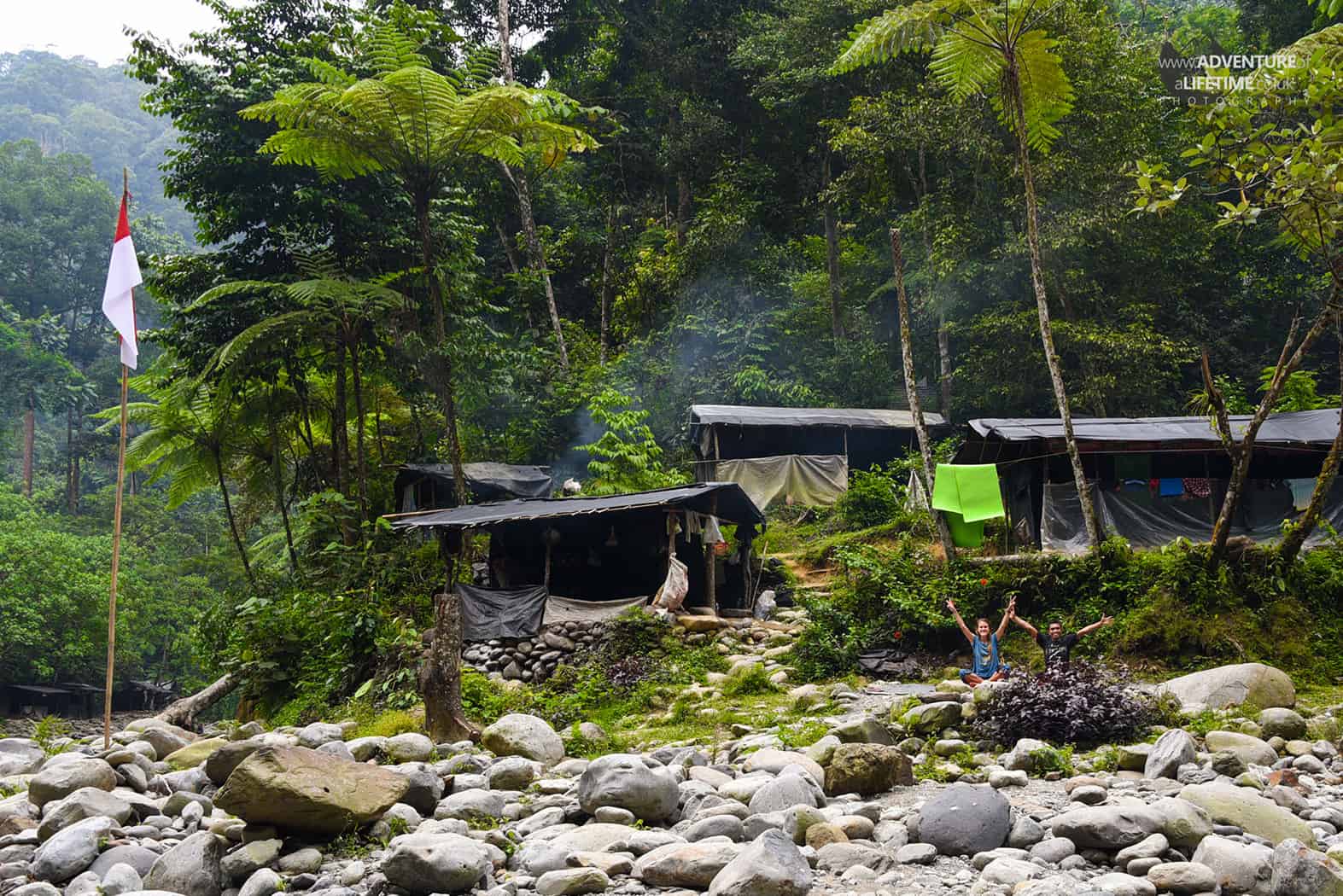 Our morning in the jungle consisted of the most lavish breakfast, some sunbathing (me) and playing in the river (Michael). To get back to Bukit Lawang, we could walk, or we could go river tubing!! It was a no brainer. 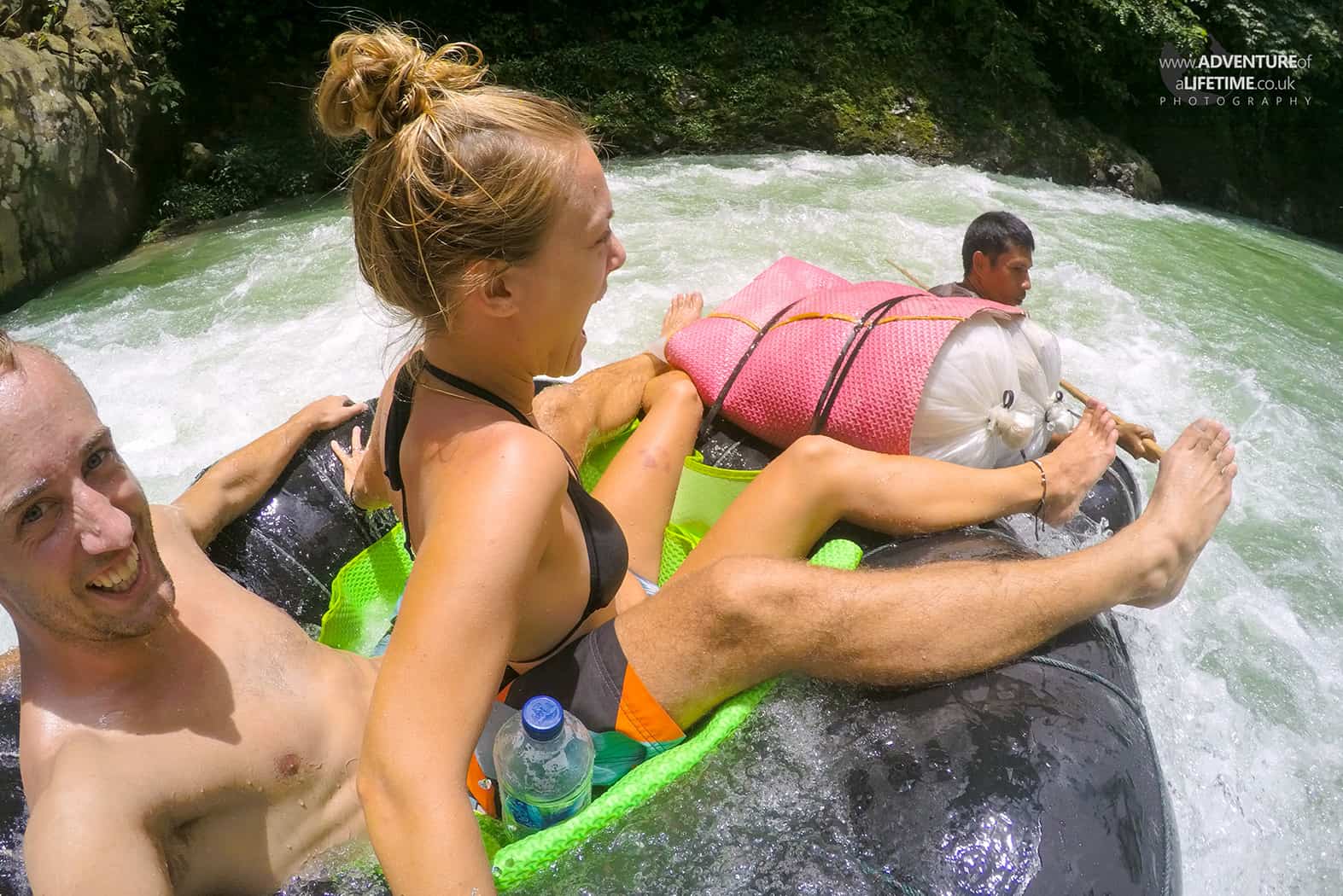 Back in Bukit Lawang

The rains hit that afternoon, thankfully we were exhausted and spent the afternoon eating and drinking by the edge of the river, just watching. In just a few hours the river had risen to near breaking point. We can’t use the bridge! (hoping desperately for the water to subside by the time we need to leave the next morning) had we still been upstream in the jungle camp, we would have been washed away… 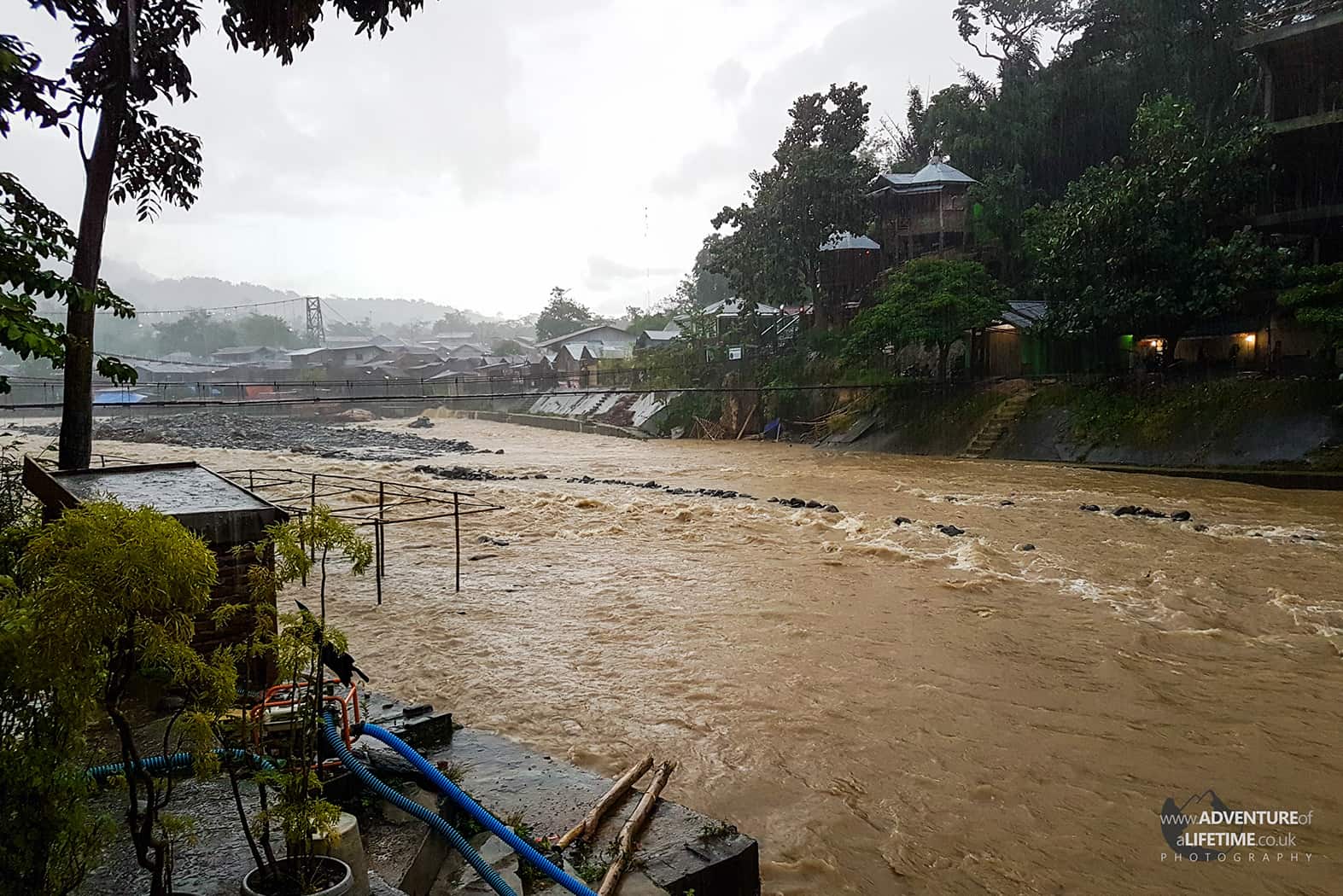 All in all a great wee adventure in Sumatra. We came to see the Sumatran Orangutan and we did just that. We had ourselves a proper jungle experience and although I still feel very conflicted about the touching and feeding of ‘wild’ Orangutans. At the same time, they’re free to leave. No way are they captive – they just opt for an easy life. I assume that had we trekked further into the jungle – we would have seen some properly wild orangutans! 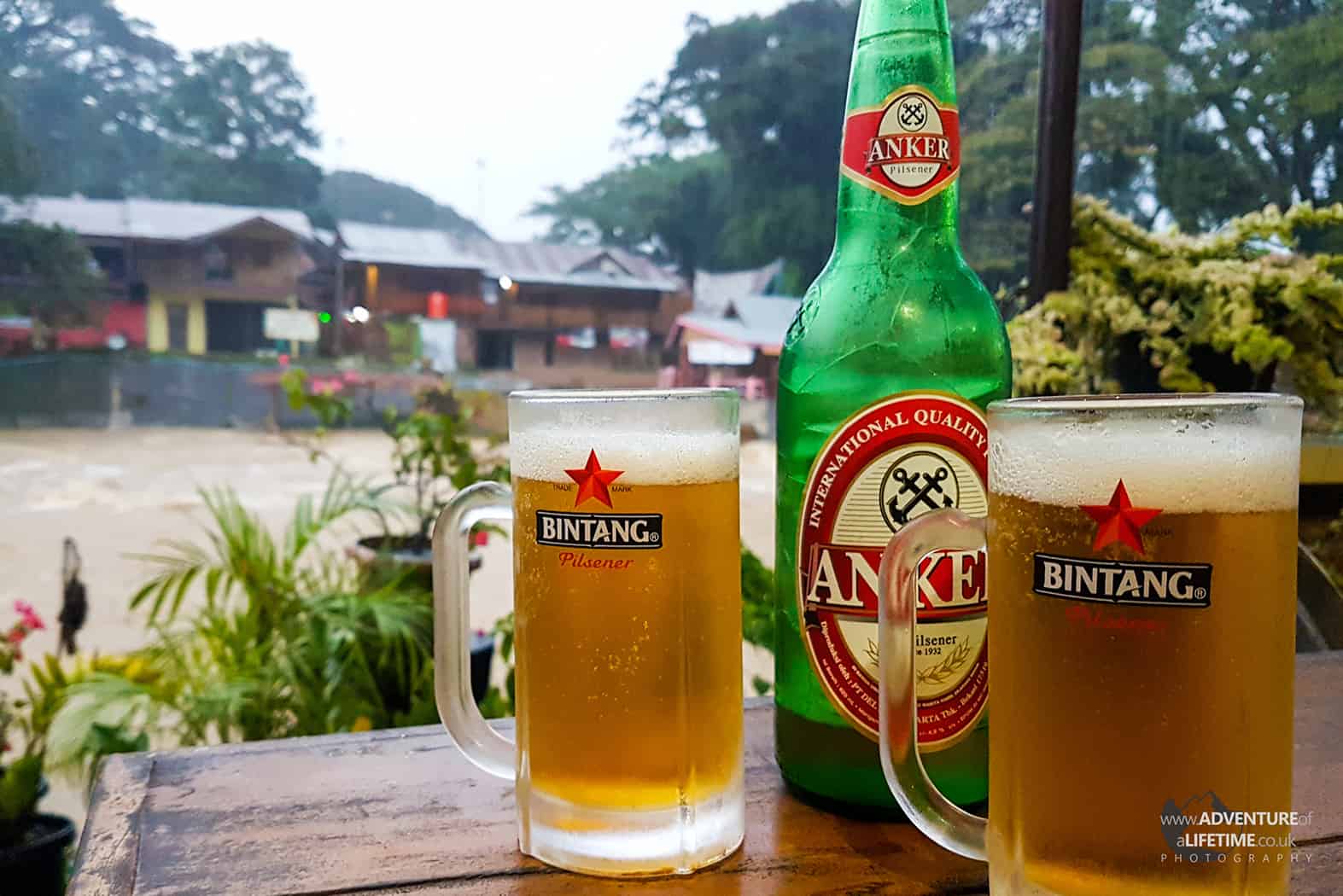 The company we booked with was Jungle Sumatra Tour & Trek who offer many variations to suit timescales and budgets. They were easy to book with, from pick up to drop off, the trip went as planned and we would recommend them!

Back to Sentosa to eek out the last remaining days of this adventure, before we have to fly home on the 14th September 2017. 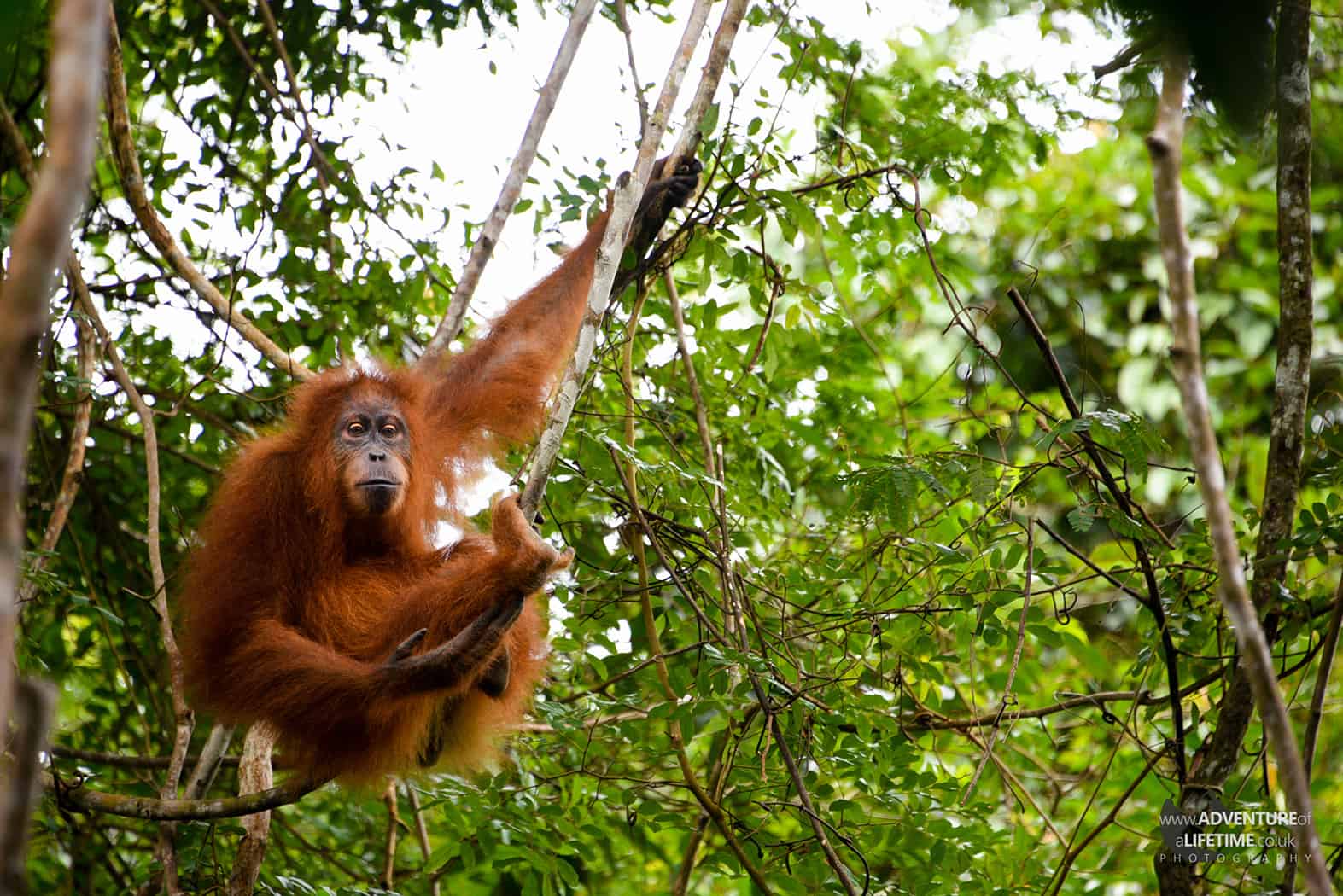